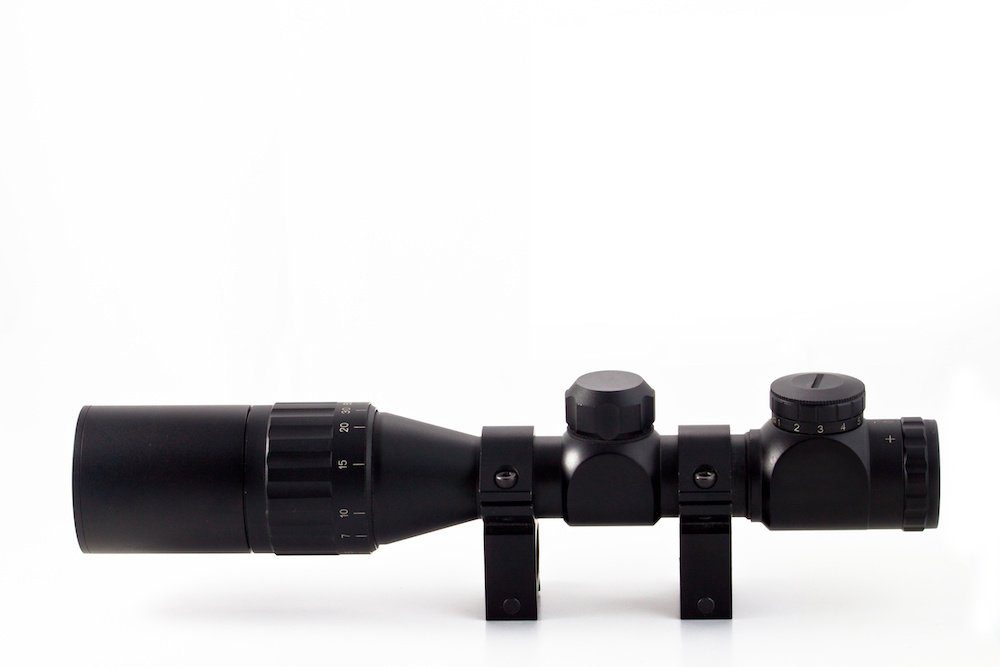 The scope is the most crucial optical component of your rifle.

It lets you identify, aim, and shoot targets at distances that exceed your naked eye’s field of vision.

Unless you’re some sort of superhuman, it’s simply not possible for you to see targets hundreds of yards away.

This is where riflescopes and knowing how to read scope numbers come in handy.

How Do Riflescopes Work?

Before anything else, do you have any idea how this device works?

Learning how a riflescope can help you become a better shot gets you one step closer to making the most out of it.

For this, you will want to look at its parts.

Arguably the most vital component of a riflescope, there are two lenses that you need to know about.

The large lens on the riflescope is the objective lens, which you can see at the scope’s front.

Its primary function is to capture light and transmit it to the other lens, specifically the ocular lens.

Once the light passes through the objective lens, it is first directed to the erector lens.

The image captured by the scope is flipped and then gets bigger due to the magnifying lens.

Following this, the light is transmitted to the ocular lens.

The ocular lens is located at the back of the scope and is smaller than the objective lens in most riflescopes.

You can point out the ocular lens in the eyepiece, which is the part where you direct your eyes.

Its primary role is to reduce the enlarged image into a smaller, viewable form.

A riflescope’s reticle is colloquially called the crosshair.

If you watch the action or war movies, the crosshair is often presented as the primary guide for snipers to shoot their targets accurately.

Similar to real life, the reticle’s objective is to assist the shooter in determining the precise aiming point to shoot.

There are numerous types of reticles, each designed to perform a distinct function.

Below are the most common reticles you can find on modern riflescopes.

The basic reticle is the most common type that provides shooters a central aiming point.

If your targets don’t require too much distance to take a good shot, the basic reticle is your best bet.

Compared to other reticles, you’ll have a more precise field of view, allowing you to zero in on your target quickly.

You may consider a Duplex as a “basic” reticle because it doesn’t differ much from the Basic.

Essentially, you’re adjusting for a horizontally fired bullet’s considerable drop over a significant distance, which is caused mainly by gravity.

Once you’ve determined your zero, the dots will provide you with an exact point of aim.

Contrary to a basic reticle, it would help if you have some experience and guesswork to shoot precisely in a longer range.

Because of its functionality, the BDC reticle is ideal for long-distance shooters.

This reticle is perfect for long-distance shooters, especially when they want to maximize efficiency.

Basically, it provides the shooter with as much information as possible to help him make every shot count.

Also, it is convenient for individuals who are accustomed to the metric system.

Because of its dependability, you can use a MIL-Dot reticle to estimate target size from a distance and calculate wind speed.

While the information it provides sounds incredibly helpful, it could be a handful if your knowledge and skill are average.

The scope tube is categorized by diameters one-inch, 30mm, and 34mm.

Most rifle references don’t have a specific rule regarding the appropriate size for a particular type of riflescope.

As a rule of thumb, the larger the tube diameter the more elevation adjustment the scope will have

As the name implies, the eyepiece is the section of the lens where you place your eye.

You will find it in the eyeball, which, as mentioned, also houses the ocular lens.

The objective lens works with the ocular lens to generate the final image you see on the scope.

Riflescopes feature a plethora of knobs, each of which serves a specialized purpose.

Windage and elevation settings are the most prominent, which help the shooter guarantee perfect gun-to-scope alignment.

Essentially, the windage adjustment is used to fine-tune the horizontal settings.

On the other hand, the elevation settings are used to fine-tune the vertical settings.

Once the alignment is set correctly, a clear shot is a possibility.

How To Read Scope Numbers

Knowing how to read scope numbers might seem intimidating at first glance.

The numbers, letters, and technical specifications in a riflescope look like a complex math problem.

Fortunately, these characters appear considerably more complicated than they actually are.

The first one or two digits on a riflescope’s label usually represent its magnification capacity.

These are the digits that come before the “x.”

For example, when you’re peeking through a 4x model, the image will appear four times bigger than when viewed with the naked eye.

You might also encounter some scopes that have a single number.

More often than not, it means it has a fixed magnification capability. These types are usually called fixed power scopes.

When you see two numbers with a dash in between them, it means you can alter the riflescope’s magnification range.

For example, a 3-9x scope has a magnification capacity of three times at its base setting.

Its highest adjustment will give you an image nine times larger.

You will see another number after the “x,” which indicates the objective lens’s measurement in millimeters.

A 4-12×32 number in a riflescope means that you have a scope with four times base magnification setting and a maximum setting of 12 times.

Additionally, the last number means that its objective lens is measured at 32 mm.

Aside from the numbers we talked about, other numbers on the scope could contribute to better aiming and accuracy.

Eye relief and tube diameter are the two most common examples.

The diameter of the tube allows you to select the rings for mounting the scope on the rifle.

Although the tube diameter is most likely not indicated on the actual scope, chances are it is noted on the manual or packaging.

What Do the Letters on Riflescopes Mean?

You may also encounter several scopes that have letters, in addition to the numbers.

Let’s get familiar with these acronyms you may see in the manual or labeled in the riflescopes.

Despite what the name suggests, AO is not related to image focusing. Instead, it’s for parallax adjustment.

Parallax is an optical phenomenon that causes the reticle to seem to move or float as your head moves.

A parallax will occur when the image’s optical plane is not in sync with the reticle’s.

You can minimize or prevent this effect when you have an AO riflescope.

Field of View, or FoV, is the area you see from left to right when you look into the eyepiece of a scope.

For obvious reasons, when you increase the magnification, the FOV of the scope decreases.

A scope with a wide FoV could make finding targets easier because you will have a better overall view.

However, for long-range targets, a wide FoV with low magnification capacity is essentially a non-factor.

Minute of Angle, or MOA, is not about time. Instead, the “minute” is used to define a tiny part of an angle.

MOA riflescopes have crosshairs that feature hash marks that function similarly to the dots on MIL-Dot scopes.

The difference is that MOA scopes use American measurements, whereas MIL-Dot scopes, as mentioned earlier, follow the metric system.

A first focal plane or FFP scope has a reticle that changes its size when the magnification is changed.

When zoomed out, the reticle seems tiny; when zoomed in, it appears huge.

The key benefit in using an FFP scope is that the reticle and view magnification stay consistent, ensuring that your gauge markers are always appropriate.

For example, a one mil mark in the crosshair will remain consistent over the magnification range.

SFP means second focal plane. A scope with this type of reticle does not maintain a proportionate size between the reticle and the image.

To put it simply, the size of the reticle appears to remain constant.

SFP scopes are less challenging to construct compared to the FFP.

Understanding the Numbers on a Rifle Scope

Now that you understand the numbers indicated on riflescopes, you can go ahead and check out some highly-rated riflescopes.

Armed with this knowledge, you can rest assured that you’d be able to pick the right model for your needs. 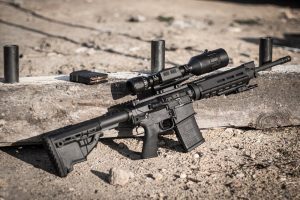 Best Prism Scopes for AR in 2021: Complete Reviews With Comparisons 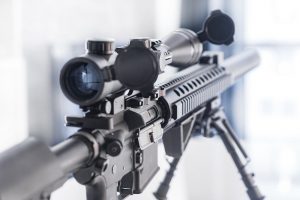 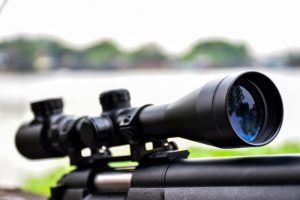 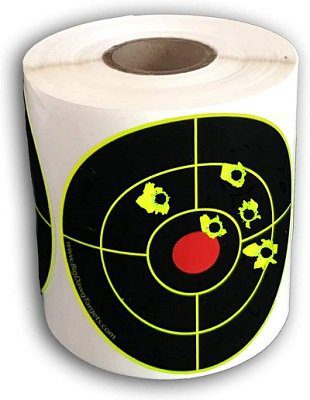 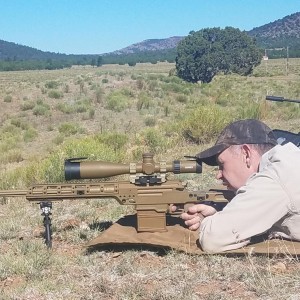 Kurt has been shooting for over 35 years starting as a teenager shooting long range rifle at the age of 14. Over the years Kurt progressed to hand gun shooting and was a regular participant in the Action Shooting matches, Service pistol matches, and IPSC matches throughout the 1990’s. Kurt is a Certified NRA instructor certified to teach Basic pistol, Personal protection inside the Home, and Personal protection Outside the Home. He is also an accredited RSO, (Range Safety Officer). Kurt has also attended several training courses for tactical handgun and tactical carbine training from International Tactical Training school in Los Angeles, CA and has also attended the Gunsite Precision Rifle course in Paulden, AZ. Kurt believes in continuing education and practice, taking as many courses as possible and most of all shooting as often as possible.

Best Prism Scopes for AR in 2021: Complete Reviews With Comparisons

The best prism scopes for AR will give you access to a larger range, making a significant difference in your hunting. You’ll experience many of

For optical brightness and a shorter eyepiece, the best fixed power scope for AR will make a significant difference. It can upgrade your hunting gear

When looking for the best rifle scope, it’s worth sticking with manufacturers that have built a solid reputation in terms of quality and reliability. However, it